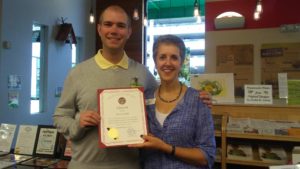 Mike Houston is one of seven new Food Council Members joining us in 2019. He works closely with our Food Economy Working Group, our Policy Committee, and our Licensing Subcommittee. He is the General Manager at the Takoma Park Silver Spring Co-Op, and he joins the Food Council with extensive experience in the natural foods industry.

Mike started out as a cashier at an independent natural food store in downtown Brooklyn called Perelandra.  It had opened as a small store in 1976 and grew through the years into a neighborhood institution.  He loved the knowledgeable customers, his hip co-workers, and the kind owners.  He learned something new about food, health, and nutrition every single day, and especially enjoyed meeting local food makers that all seemed to have their own unique story. He moved through the ranks at Perelandra, working a variety of positions within the store. He relocated to the DC area in 2012,  was hired as assistant store manager at Dawson’s Market in Rockville a few months before it opened.  Being a brand new store, Dawson’s provided the unique opportunity to develop the type of community meeting place that Mike had fallen in love with at Perelandra.

Mike became the Store Manager of Dawson’s in 2014 and proudly saw Dawson’s receive recognition for community engagement, environmental practices, and win the Rockville Chamber’s Large Business of the Year award in 2017.  In August 2018, Mike became General Manager of the Takoma Park Silver Spring Food Co-op (TPSS).  TPSS has been serving the natural and organic food needs of the community since 1981, and is a democratically operated Co-op owned by the community.

Mike was drawn to the natural foods industry for many reasons, but the connection to local growers, makers, and producers is one of the best aspects.  The DC area has a wealth of amazing small food businesses, and shared kitchens like Union Kitchen, Mess Hall, and Tastemakers help lower the barriers to entry and introduce new products to market.  Likewise, the wealth of farmland in Montgomery County allows the opportunity to have a first hand look at where produce that the store sources from is grown.
Mike has found the biggest challenge of his job to be the time commitment.  TPSS is open 7 days a week, 5,068 hours a year.  Spending time with vendors, training staff, making operational and environmental improvements, and marketing the store leaves precious little time for the rainy day projects that he hopes to get to.
Throughout his ten years in the industry, but especially working in Montgomery County, Mike has been very interested and involved in inclusive hiring.  He believes that retail stores, restaurants, and food businesses of all kinds have the type of entry level positions that can be filled by populations that are often overlooked by hiring managers.
Mike became involved with the Food Council during his time at Dawson’s, most intimately on the “Meet the Makers” event in 2017 that introduced producers in the first Food and Beverage Guide.  Mike says, “The Food Council, just like the natural food industry, sits at the nexus of economics, environmentalism, education, and food security.  As a retailer, the four working groups of the Food Council make up the various issues that affect our business every day.  The opportunity to work with diverse stakeholders and make progress on important issues of our local food system is unbelievably rewarding.  The ability to both lend my professional expertise to certain issues, and learn from the experience of others for something else is a wonderful feeling.  Showcasing the wonderful food businesses and farms throughout this county is a joy as a member of the Food Economy Working Group.”

The Food Council is grateful to have Mike’s expertise and perspective, and we are proud to work with partners like the Takoma Park Silver Spring Co-Op.

Environmental Impact Working Group
1st Thursday of Every Month
The next meeting will be on Thursday, March 12th, 9-11am (4825 Cordell Ave, 2nd floor, Bethesda)

Food Economy Working Group
3rd Monday of Every Month. Due to the President’s Day holiday, the next meeting has been moved to Wednesday,  February 26th, 7-9pm at Bethesda Green.

Food Education Working Group
4th Tuesday of Every Month
The next meeting will be on Tuesday, February 25th from 9:30-11:30am (4825 Cordell Ave, 2nd floor, Bethesda).

Food Recovery & Access Working Group
2nd Thursday of Every Month
The next meeting will be on Thursday, March 12th, 9:30-11:30 am (Dennis Ave Health Center, Silver Spring).