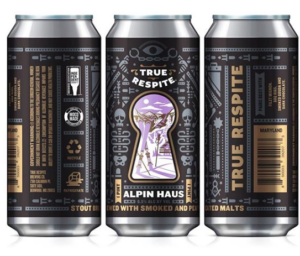 The “Meet the Makers” blog series highlights the people, products, and produce featured in the 2018-19 edition of the Food and Beverage Guide. From beer to chocolates to apples to hot sauce, supporting local producers has never been tastier! Get to know the neighbors proudly bringing you MoCo Made products.

Brendan and Bailey O’Leary decided to open True Respite in April of 2014 while living in Denver, CO. They had both been home brewing for years and had completely fallen in love with the brewing culture in Denver. They met Kenny, who is now the True Respite Brewmaster, in 2015 and decided to partner together to make their dream a reality. The O’Leary’s evaluated the entire US to determine the perfect spot to open a brewery, knowing they’d prefer to be near their families on the East Coast. During a visit to Brendan’s parents’ home in Loudoun County, VA, the two realized that the DC metro was the perfect place to open a brewery.

The team considered a handful of names for the brewery before settling on True Respite. They decided on this name in thinking about the purpose of the brewery: to give people a place where they could relax, get away from the daily grind, smile and laugh, and forget about everything outside of the brewery doors. Brendan came up with the word “respite,” meaning a short period of rest or relief from something difficult or unpleasant. The couple added the word “true” to imply wholeness and authenticity. The brand became about being the key to your own happiness, and taking time out of your busy life to do something that you love; hence, True Respite. Bailey and Brendan worked together to develop a tap room experience that they loved. It was important to the couple that guests could see into the brewing operations while sitting in the tap room, so they installed large windows in the wall between the tap room and the production area so that guests never forget that they’re sitting in a brewery. True Respite opened its doors in 2018 on Calhoun Place in Rockville.

The brewery maintains a high quality and diverse tap list. Kenny, the head Brewmaster, has been brewing for nearly 26 years, and is excellent at brewing traditional styles. However, he’s also having fun experimenting with new styles and trends. Kenny had an idea before the brewery opened to have a fruited blonde ale on tap, which both Bailey and Brendan were skeptical of. This creation, now called “Peeled,” and the Peeled series has developed into one of True Respite’s most popular and iconic series of beers.

The brewery received 6 medals at the Maryland Beer Cup in 2018:  three gold medals, one silver medal, 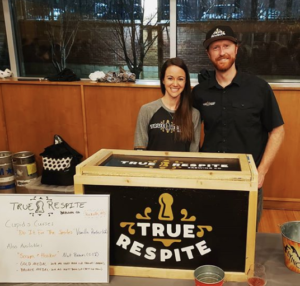 one bronze medal in the style category, and one bronze for overall Best in Show. The local community response to the beers has also been incredible. Since opening, True Respite has continuously grown at a sustainable rate. The team is even starting conversations about purchasing additional equipment to increase capacity because they’re selling out of all of the beer they can currently brew.

True Respite also maintains sustainable brewing practices and is conscious of the environmental impact of the brewing process. All spent grain remaining after the mashing process is gathered up, stored, and saved for collection each week by Groff’s Content Farm located in Rocky Ridge, MD, where the grain is used as feed for their livestock. The brewery also reduces their energy requirements when brewing back-to-back batches by pre-heating the second batch’s brewing water with the outgoing post-boil hot beer in a specially designed energy exchanger at the outlet of the brewhouse. This reduces both the energy load of cooling the hot beer and the energy load of heating the cold water, thereby reducing the overall energy requirement. True Respite is also working with the Rockville Watershed Committee to help support and host the Rockville Brewshed. The Rockville Brewshed is a way to spread the word about how important clean water is for brewing quality beer, and educate patrons on how they can protect our watershed.

In late 2018, True Respite incorporated the MoCo Made logo into the labels on their beer cans. As one of the first MoCo food or beverage businesses to display the logo so prominently on their product, True Respite is a leader in fostering a stronger local food movement for Montgomery County. We are proud to have True Respite as a MoCo Made partner, and lucky to have such great beer made right here!

While there are constant, unforeseen challenges in the brewing industry, Bailey, Brendan, and Kenny have found building this business to be incredibly rewarding. They plan to continue to brew more beer until they’ve maximized the fermentation capacity of their current space, and they’re interested in expanding their menu to include house-made sodas, kombucha, sour beers, and even roast coffee. The team has a lot of exciting dreams for True Respite and look forward to building them! 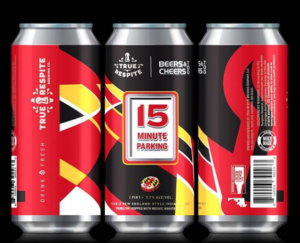 On May 4th, True Respite will be hosting a “Hike with a Brewer” event where guests can meet with brewmaster Kenny, go for a hike together, and gather an ingredient that Kenny will then use to brew a beer. After the hike, all guests will head back to the brewery to share a pint together.

On May 9th, we will be partnering with True Respite to host a MoCo Made Happy Hour from 5-7pm. We hope to have you join us!

MoCo Made at Bethesda Central Farm Market on Sunday, September 19th from 9-1:30PM.

The Power of Food: Cultivating Equitable Policy Through Collective Action

The first Tuesday of the month from 9:30AM-11AM via Zoom.

The Food Education Working Group (FEdWG) would like to cordially invite you to our Gardening Grant showcase that we will be taking place over the course of four (4) FEdWG meetings in 2021.