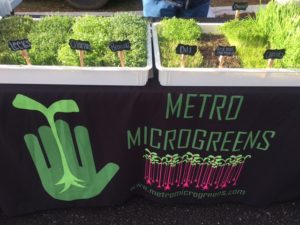 Have you ever visited a friend’s house and been inspired to eat healthier? Maybe they had an abundance of fresh fruit overflowing out of a large bowl on the counter, or a well-organized refrigerator stocked with chopped veggies, meal-prepped proteins, and homemade dips. Imagine the inspiration you’d have from visiting the home of Mark and Debbie Ross, founders of Metro Microgreens. Mark and Debbie grow a wide variety of microgreens hydroponically in their home in Rockville.

Microgreens are the early stage greens of plant seeds, harvested when they are just 10 days to two weeks old.They are highly nutritious, and are an easy, delicious way to incorporate greens into your favorite meals. Microgreens can be added to salads, sandwiches, smoothies, chicken, fish, eggs, and soups, or eaten alone. They have a more robust flavor than their fully-grown counterparts and are extremely nutrient dense.

Metro Microgreens began in February, 2017. Mark Ross, Metro Microgreens founder, had been organically farming for 10 years, running a large school garden at a local public elementary school in North Potomac. According to Mark, “learning to grow microgreens was an easy transition. My wife Debbie always knew organic farming was a passion of mine and kept bugging me to make it into a real business.” 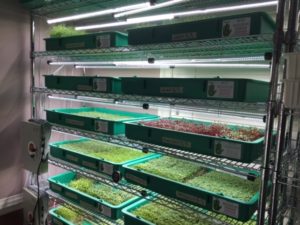 What began as a hobby has expanded just within the past year from being sold at one farmers market to now six farmers markets, as well as being used by local restaurants, at corporate health & wellness events, by personal chefs and in several international embassies.

Metro Microgreens are grown indoors, and are grown vertically so that the space is used most efficiently. The greens grow on a coconut husk, or coco coir, without soil. Metro Microgreens does not use chemicals or fertilizers, and the microgreens are sold living, still attached to the coco coir. “We grow 15-20 varieties each week every week of the year. Since our microgreens are still living when sold, they stay fresh and nutritious up to 2 weeks. [This is] much longer than microgreens or herbs purchased at the store which were harvested before sold,” says Mark Ross. 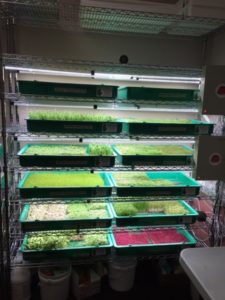 The mission of Metro Microgreens is to make people aware that microgreens are among the healthiest foods that can be added to their meals; a small amount adds a tremendous boost of nutrition. A little known aspect of the company is that they grow several unique varieties based on requests, which can be ordered on their website, www.metromicrogreens.com.  Since it’s a live product, customers do need to pick up from the company in Rockville or at one of the local farmers markets where Metro Microgreens are sold. Questions? Head over to the Metro Microgreens website to learn more.

Environmental Impact Working Group
1st Thursday of Every Month
The next meeting will be on Thursday, March 12th, 9-11am (4825 Cordell Ave, 2nd floor, Bethesda)

Food Economy Working Group
3rd Monday of Every Month. Due to the President’s Day holiday, the next meeting has been moved to Wednesday,  February 26th, 7-9pm at Bethesda Green.

Food Education Working Group
4th Tuesday of Every Month
The next meeting will be on Tuesday, February 25th from 9:30-11:30am (4825 Cordell Ave, 2nd floor, Bethesda).

Food Recovery & Access Working Group
2nd Thursday of Every Month
The next meeting will be on Thursday, March 12th, 9:30-11:30 am (Dennis Ave Health Center, Silver Spring).